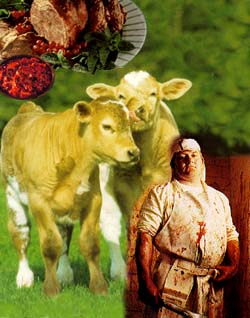 One of the less charming traditions of the UK meat industry has been to force herbivores to cannibalise the remains of their butchered companions. The consequences have been gruesome and tragic. By promoting enforced cannibalism, UK agribusiness and the meat trade unleashed the human analogue of bovine spongiform encephalopathy on the population at large.

Prion-based diseases have long incubation periods. These may extend two decades or more. The likely toll of future human victims of Creutzfeldt-Jacob Disease (CJD), the human variant of BSE, is unknown.

Bovine Spongiform Encephalopathy (BSE) has been dubbed "Mad Cow Disease". This is because of the signs of extreme distress and disordered gait which its victims display before death. BSE is a neuro-degenerative disease of cattle. It is invariably fatal. Its immediate cause lies in mysterious infectious proteins called prions.

Prions behave as infectious agents. Yet they are 100 times smaller than viruses. Their mechanism of replication is still unclear. All the prion diseases, of which CJD is only the most notorious, are associated with the accumulation in the brain of an abnormal and protease-resistant isoform of the prion protein, PrP.

The British outbreak of BSE struck down around 160,000 cows in 1980s and 1990s. Long before conclusive proof became available, strong circumstantial evidence pointed to the macabre cost-saving practice of mixing the remains of sheep - including brains and bones - into cows' feed as the cause of the deadly syndrome.

In collusion with the British meat industry, however, the Government continued to deny the possibility of species-to-species inoculation posing a threat to humans. Official denials and smear-tactics against opponents persisted long after the potential danger of eating the remains of infected animals became known to researchers.


The ALF FAQ
Animal Rights FAQ
The Taste of Depravity
BFSS : Killing For Kicks
Animal Rights Resources
The Post-Darwinian Transition
The Slaughter of Animals for Food

"Because one species is more clever than another, does it give it the right to imprison or torture the less clever species? Does one exceptionally clever individual have a right to exploit the less clever individuals of his own species? To say that he does is to say with the Fascists that the strong have a right to abuse and exploit the weak - might is right, and the strong and ruthless shall inherit the earth."